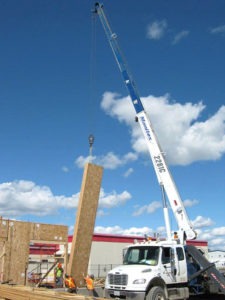 “AHC is one of McDonald’s primary contractors in British Columbia, so we knew that speed of construction is a priority for the client,” said Paone. “We estimated that using SIPs could cut up to six weeks off the project’s timeline.”

At 8,600-square-feet, the Dawson Creek franchise is larger than an average McDonald’s. Yet, the AHC crew was able to dry-in the building in just 10 days.

“…we simplified the roof truss layout, and the sub-trades have an easier time working in a building built with SIPs.” – John Paone, ACH Construction

“With SIPs, the framing is already encapsulated with sheathing, and there is no need to add insulation,” said Paone. Paone said there were not a lot of electrical services in the McDonald’s lobby. This meant within a few days of drying-in, they were putting up drywall.

“This is a test project, and McDonald’s has installed systems to monitor and assess energy use compared to their other buildings,” said Paone. “So far, everyone is very impressed.”

“I was a little worried at first, but when we looked into it, SIPs seemed like a good way to go,” said project architect Peter Lovick of PJ Lovick Architect, Ltd. Lovick said that in addition to saving construction time, “you get a square building.”

There was another appealing benefit. Lovick said SIPs are easy to work with, adding, “…we simplified the roof truss layout, and the sub-trades have an easier time working in a building built with SIPs.”

Are you a builder? Visit our Builder page.

Watch the timelapse video of this project under construction.